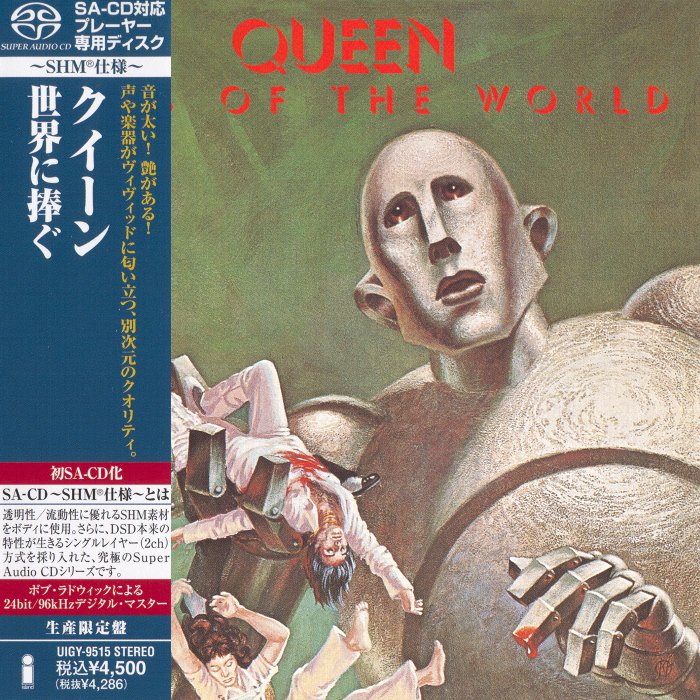 If Day at the Races was a sleek, streamlined album, its 1977 successor, News of the World, was its polar opposite, an explosion of styles that didn’t seem to hold to any particular center. It’s front-loaded with two of Queen’s biggest anthems – the stomping, stadium-filling chant “We Will Rock You” and its triumphant companion, “We Are the Champions” – which are quickly followed by the ferocious “Sheer Heart Attack,” a frenzied rocker that hits harder than anything on the album that shares its name (a remarkable achievement in itself). Three songs, three quick shifts in mood, but that’s hardly the end of it. As the News rolls on, you’re treated to the arch, campy crooning of “My Melancholy Blues,” a shticky blues shuffle in “Sleeping on the Sidewalk,” and breezy Latin rhythms on “Who Needs You.” Then there’s the neo-disco of “Fight from the Inside,” which is eclipsed by the mechanical funk of “Get Down, Make Love,” a dirty grind that’s stripped of sensuality. That cold streak on “Get Down, Make Love” runs through the album as a whole. Despite the explosion of sounds and rhythms, this album doesn’t add up to party thanks to that slightly distancing chilly vibe that hangs over the album. Nevertheless, many of these songs work well on their own as entities, so there is plenty to savor here, especially from Brian May. Whether he’s doing the strangely subdued eccentric English pop “All Dead, All Dead” or especially the majestic yet nimble rocker “It’s Late,” he turns in work that gives this album some lightness, which it needs. And that’s the reason News of the World was a monster hit despite its coldness – when it works, it’s massive, earth-shaking rock & roll, the sound of a band beginning to revel in its superstardom.